Streptococcus suis is a bacterial pathogen that causes infection in piglets and weaners, which is endemic on virtually all Dutch pig production farms. Given the absence of an effective vaccine, amino-penicillins are used frequently to control infections. Use of such antibiotics will affect the diversity of the microbiome of the tonsils and GI-tract and negatively influence the immune development of young piglets. Moreover, their use will select for resistant organisms of public health concern, MRSA and ESBLs.

In this project we will use shotgun metagenomic sequences of microbiota samples from tonsil biofilm small intestine and faeces of young pigs pre-and post-weaning which are either healthy or displaying symptoms of S. suis and other infectious diseases to

Collectively, the results will provide a promising starting point for using targeted cocktails of bacteria to establish healthy microbiota ecosystems that provide colonisation resistance against pathogens and potentially the means to isolate a rich source of new therapeutic molecules. Emphasis will be given to identify potential antagonists of S. suis in palatine tonsil biofilms, which are considered as the main route through which clinical isolates enter the body and cause invasive disease. This addresses the need for alternatives to antibiotics as control measures against S. suis. Besides, the upper respiratory tract harbours other bacterial pathogens, such as Pasteurella multocida, Actinobacillus pleuropneumoniae, Haemophilus parasuis, as well as several viral pathogens that might be influenced by microbiota effects on innate immunity in developing piglets and colonisation resistance against pathogens. 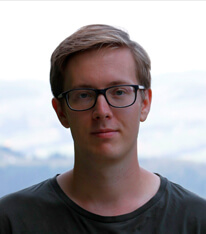 I chose to do a PhD in metagenomics due to having an interest in microbial ecology as well as a more general interest in science. The work I do is similar to what I did as a master student at the University of Oslo, so I knew what I was signing up for. I find microbiome research interesting in part due to it being a relatively new and fast developing field that still has many unanswered questions. Apart from the academic side, I am happy to be working on a project that has concrete goals towards improving animal and human health.