Home » News » Zoonoses in the night – which viruses do Dutch bats carry?

Zoonoses in the night – which viruses do Dutch bats carry? 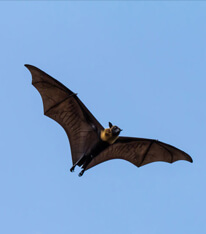 Bats are not particularly popular among the general public. Many people think that bats spread rabies and other life-threatening diseases. The truth is more nuanced, of course. Bats can indeed transmit zoonoses (diseases that can be transferred from animals to people). But in the Netherlands, only one potentially dangerous zoonosis has been demonstrated so far in bats; a virus that can cause rabies. Transmission of this virus to people is very rare, and only five cases have ever been reported in Europe, none of which were in the Netherlands.

Whether bats in the Netherlands can transmit other zoonoses is not known. The research project “Zoonoses in the night” has been set up to improve our knowledge in this area. In this project, researchers are working on several questions: Which viruses do the 17 species of bat in the Netherlands carry? Is there any evidence of viruses being transmitted from bats to people? But also: how much actual contact is there between people and bats, and how well-informed is the average Dutch citizen about the factual risks?

Answers are being obtained in various ways. Blood from people and cats who have been in contact with bats is investigated. Bats found dead are also examined, and bat droppings are analysed. Questionnaires have also been drawn up for bat professionals and the general public. Various organisations are collaborating in the project, including Erasmus MC, the National Institute for Public Health and the Environment (RIVM), the Dutch Mammal Society and Wageningen University & Research. Each party has its own motives to participate in the research.

RIVM wants to use the outcomes of the research to improve public awareness. Their National Coordination Centre for Communicable Disease Control advises people who have been in direct contact with bats. According to Corien Swaan, head of the Prevention and Control Department, it is extremely important to keep these guidelines up-to-date. ‘If research reveals that besides the rabies virus Dutch bats carry other zoonoses too, then we need to modify our information accordingly.’

Wageningen Bioveterinary Research: increased insight into the risk of transfer

For Bart Kooi, researcher at Wageningen Bioveterinary Research, the project is mainly about the transmission of viruses from bats to people. ‘At present, we know far too little about the risk of infection. However, we suspect that the risk is very low. A study of this size will provide us with far better insight into the subject.’ Among other aspects, the researchers search for viruses in droppings and tissues of bats by use of sensitive molecular technigues. ‘That will tell us far more about the viruses that such a bat is infected with’, explains Kooi. ‘That will also include virus species other than the rabies virus. We might also be able to detect antibodies against those viruses in the blood of people and cats that have had contact with bats. That will increase our knowledge of the risk of transmission.’ Meanwhile at WBVR Phaedra Eble has taken over this project.

Marcel Schillemans, Team Leader Bats at the Dutch Mammal Society, hopes that the research will lead to a better protection of bats. Bats are at risk due to their poor image. ‘Some people seal the gaps in their cavity walls because they are scared for the diseases that bats could transmit’, Schillemans explains. ‘This means that some bat species lose their home, which is a shame because they are useful animals. They eat many insects, for example.’ According to Schillemans we do not need to fear bats: ‘They always avoid direct contact with people. So far, there is no reason why we could not live in close proximity with bats in the Netherlands. And I do not expect that to change as a result of this study. We can inform the public about these scientific outcomes. And if the study does reveal a different picture, then it is important that we know that too.’

The project Zoonoses in the Night is coordinated by the Department of Viroscience at Erasmus MC. For her PhD research at Erasmus MC in Rotterdam, Lineke Begeman is investigating the viral diversity of bats and their zoonotic potential in the Netherlands. She is doing this in collaboration with professor Thijs Kuiken, dr Chantal Reusken, dr Judith van den Brand, professor Marion Koopmans and all external partners. ‘Droppings of bats and sera of bat workers are used to investigate the viral diversity and the zoonotic potential. Bat droppings of the common pipistrelle, Nathusius’s pipistrelle and serotine bat are needed from across the Netherlands. This is only possible because of the excellent collaboration with all NCOH partners, the Dutch Mammal Society and RIVM!’

This project is funded by the Netherlands Organisation for Health Research and Development (ZonMw) and runs until March 2021.

More information about bats and the Corona virus outbreak.

The Dutch Mammal Society wrote the answers to frequently asked questions about the 2019 Coronavirus outbreak and bats (only in Dutch).