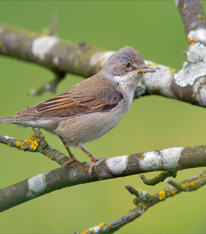 A migratory bird tested positive for West Nile Virus in the Netherlands. The bird was caught in August during routine sampling in the region of Utrecht. West Nile Virus is a disease transmitted by mosquitoes, making it a type of an arbovirus. Humans, and other mammalian species such as horses, are susceptible to the virus. This is the first time the virus has been detected in the Netherlands.

Wild birds are routinely captured, sampled and released as part of the One Health PACT project, a research consortium coordinated by Professor Marion Koopmans, head of department of Viroscience, Erasmus MC). The One Health PACT research consortium was launched last year (2019) with the aim to develop an early-warning system for the introduction of exotic viruses, including West Nile Virus. Since the beginning of 2020, over one thousand wild birds have been sampled at various locations within the Netherlands.

The Common Whitethroat is a migratory bird which breeds throughout Europe and winters in tropical Africa. They arrive in the Netherlands in April and migrate to the tropical regions in Africa in September. The same bird was captured, tested and released earlier this spring and found negative. Thus, the most likely explanation is that the bird got infected while in the Netherlands.

Because the virus can be transmitted to humans, the National Institute for Public Health and the Environment (RIVM) is investigating if further surveillance and control measures may be necessary. In 2018, a special committee, chaired by the RIVM, was set up in response to the continuous spread of West Nile Virus across Europe. Other members of the committee are EMC, the NVWA, Royal GD, the Faculty of Veterinary Medicine in Utrecht, the Dutch Wildlife Health Centre and Sanguine. In addition, further research into West Nile Virus and other arboviruses is conducted by the One Health PACT consortium.

In the past decade, the West Nile Virus continued to spread steadily over large parts of the world including South-East and Central-Europe. Virus transmission occurs through the bite of infected mosquitoes. Infected migratory birds can introduce the virus into virus-free areas. In Central Europe, most virus transmission occurs during the summer months when migratory birds arrive and infect local mosquito populations.

An estimated 80% of infections in humans are asymptomatic. The remaining 20% may have mild symptoms such as fever and flu-like symptoms. In extreme cases, infection with West Nile Virus may result in serious neurological symptoms requiring medical care.

In horses, most infections are thought to be asymptomatic and only a minority of horses (20%) may express clinical signs. These may include loss of appetite and depression. More serious neurological symptoms may occur in up to 10% of infections and may include stumbling, partial paralysis, impaired vision and convulsions. West Nile Virus is a notable disease and must be reported.

The Netherlands, with its dense population of humans and livestock, international transport and travel hubs and water-dominated landscape, is particularly vulnerable to infectious disease outbreaks. The One Health PACT consortium aims to understand if and how changes in climate, farming, water management and travel may lead to mosquito-borne disease outbreaks in order to be better prepared. The Dutch Research Council (NWO) funded the One Health PACT project with nearly nine million euros, which was complemented with an additional one million by public organisations participating in the consortium. The consortium was thus created, and the incorporation of citizen science makes One Health PACT unique. One Health PACT is one of the research projects of the Netherlands Centre of One Health (NCOH).

Besides the many consortium partners, there are also many volunteers who help to catch the birds.

Professor Marion Koopmans, virologist and head of the Department Viroscience of the Erasmus MC, is coordinator of One Health PACT.
Email: [email protected]
Tel: +31 (0)10 407 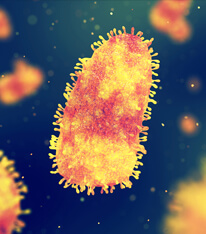