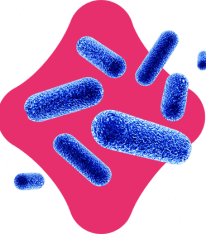 The world is fighting two pandemics at the same time – COVID19 and the silent pandemic of antimicrobial resistance (AMR). In this podcast two of NCOH-AMR Principal Investigators, Dr. Nathaniel Martin and Prof. Arjan de Visser talk about their work.

AMR occurs when bacteria become resistant to antibiotics, making their infections harder to treat. In Europe, approximately 25.000 people die every year because of drug resistant infections. It is estimated that AMR will kill an extra 10 million people globally by 2050.

In this podcast we talk with three researchers, who all tackle the AMR problem from a different angle. Dr. Sam Linsen is a Dutch researcher who started Squared Ant in China, a business focusing on antibiotic residue, testing and data gathering in order to map the extent of the problem worldwide.

Prof. Nathaniel Martin, Professor in biological chemistry at Leiden University. With his research group, he tries to understand bacteria at a molecular level in order to be able to design new antibiotics and develop new molecules that will block resistant pathways bacteria have developed.

The last guest is Professor Arjan de Visser, evolutionary biologist at Wageningen University, who is working on models to predict evolutionary pathways. By understanding the determinants of evolution he tries to get insights in why bacteria evolve resistance.

You can listen to the podcast or read the whole text here.