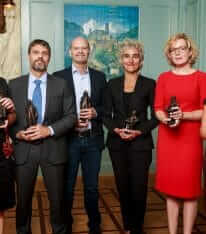 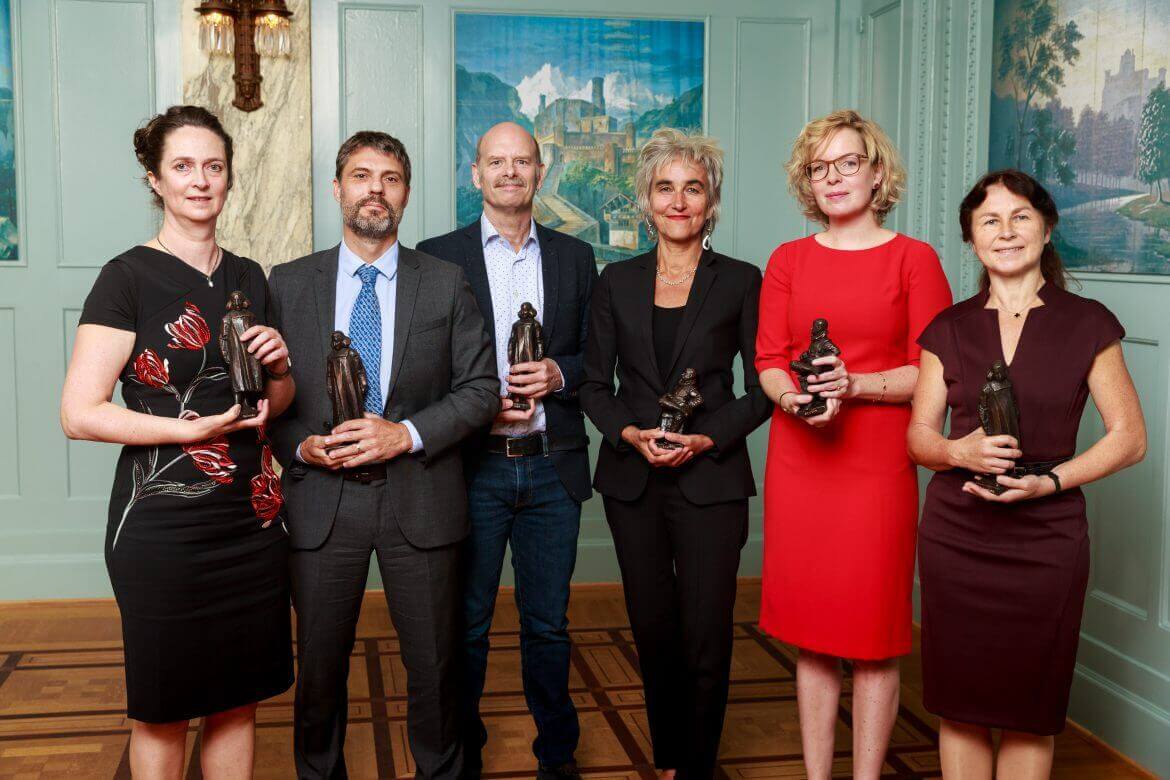 This year is the first time that two researchers will be receiving the Stevin Prize. The key focus of both prizes is the quality of the researcher: whereas the Spinoza prize emphasises the scientific work and fundamental questions, the Stevin Prize primarily honours the social impact. ‘NWO stands for scientific excellence andsocial impact. That’s why we are attaching equal weight to both curiosity-driven research and applied research,’ says NWO chair Stan Gielen.

These NWO prizes will enable the researchers to conduct ground-breaking research. Social psychologist Carsten de Dreu is using his Spinoza Prize to set up an interdisciplinary research group. He intends to develop a model of cooperation and conflict within and between groups anchored in neurobiology. Marion Koopmans also expects her research to have a major impact. ‘I want to make sure that we prepare ourselves better against new infections in the future. Then we can respond proactively – instead of reactively – because we will detect outbreaks sooner.’

The fundamental discoveries of John van der Oost’s research group have been indispensable for the revolutionary CRISPR-Cas technique, but according to him we are not there yet by a long chalk. ‘As far as bacterialdefence mechanisms are concerned,we’ve only had a glimpse of the tip of the iceberg. I would like to study different, perhaps even better, ways of using the technique. Maybe there are even more natural variants. And so we continue to dream, that’s the beauty of our field.’

Marileen Dogterom is going to reconstruct a living cell in order to genuinely understand it. ‘The fundamental insight that this will enable us to develop will act as a real game changer for many applications in health care and biotechnology. The Spinoza Prize is going to be a massive boost for us in that respect.’ Anna Akhmanova examines the living cell from a biological perspective. ‘My dream is to be able to see, in extremely high resolution, how molecules do their work in living cells and how that changes during illness or during treatment with a medicine.’ Dogterom and Akhmanova are not strangers to one another and regularly look across the boundaries of their discipline to inspire one another. Beatrice de Graaf does the same in another field, in the realisation that security and terror harbour strong psychological and social components. She work closely with her department and a team of administrators, lawyers, social psychologists and pedagogues.

Knowledge of how healthy cells function helps us to understand what goes wrong at the cell level in diseases such as cancer, Alzheimer’s and ALS. Anna Akhmanova (1967), professor of cellular dynamics at Utrecht University, is one of the leading experts in the field of cell biology of the cytoskeleton. Akhmanova has made a number of ground-breaking discoveries that reveal exactly what the cytoskeleton’s function is and which mechanisms underlie these functions.

Professor Marileen Dogterom (1967) studies the cytoskeleton from the perspective of physics. This enables her to examine what goes wrong at the molecular level with afflictions such as cancer. She is professor of bionanoscience at TU Delft and became world famous for her experimental research on the forces generated by the cytoskeleton.

When we are in a group, why do we react to a competing group in a certain way? Little is known about the biological mechanisms behind this behaviour. Professor Carsten de Dreu (1966) conducts ground-breaking research on conflicts, negotiation processes, decision-making and creativity in small groups. He is professor of social and organisational psychology at Leiden University. He has demonstrated that poor decision-making and groupthink does not only come about as a result of cognitive shortcomings.

John van der Oost (1958), professor of microbiology at Wageningen University & Research, is one of the founders of the pioneering CRISPR-Cas technique; it enables scientists to alter, add or remove genes in a highly targeted manner. Van der Oost discovered how the CRISPR-Cas system contributes to the bacterial anti-viral defence mechanism.

Beatrice de Graaf (1976) is professor of history of international relations & global governance at Utrecht University. She is considered a scientist that knows how to bring together science, politics, practice and society. De Graaf likes to look beyond the confines of her discipline in the realisation that security and terror harbour strong psychological and social components. She is in high demand as a terrorism expert and advises various public and private organisations in the Netherlands and abroad.

Marion Koopmans (1956) is professor of virology at Erasmus MC in Rotterdam. Her research focuses on the transmission of viruses from animals to humans (zoonoses), and on the large-scale spread between humans (outbreaks and pandemics).The creation of worldwide networks to systematically control infectious diseases on a large scale forms the golden thread in Koopmans’ work. This is not only vital for patients but also crucial for a quick containment of subsequent outbreaks.